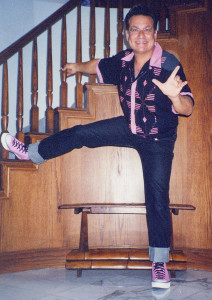 “Rollin’ Rock” magazine was started in 1970 as a spoof of “Rolling Stone” which promoted millionaire “hippie” influenced drugged-out groups disguised as “underground”.  In truth they were–and still are–the “establishment”.   We are the real “underground”!

In the 1950’s the racists and segregationists wanted to destroy Rock’n’Roll which they considered as an “evil race mixing music”.   Indeed Rock’n’Roll was a major force in shattering the barriers of segregation and bigotry.  God Bless Alan Freed!!

In Europe the Socialists and the Communists viciously attacked Rock’n’Roll and blue jeans, which they regarded as malevolent influences of American Capitalism. Even though these types are still around, Rock’n’Roll  and Rockabilly in some ways are today more vibrant than ever!

Rollin’ Rock Records was the first record company since the 1950’s to record a standup slappin’ bass in Rock’n’Roll music.

In 1974 I recorded Ray Campi with the iconic song “Rockabilly Rebel” (from the album by the same title) to glorify the Real Rock music we loved so much.

This album was also recently re-released by Part Records.  Part-CD 613.004.

RAY CAMPI & his ROLLIN’ ROCK REBELS (later renamed Rockabilly Rebels) were the first Rock’n’Roll band since the 1950’s to both record and perform on stage with a Standup Slappin’ Bass.

According to the New Musical Express The Rollin’ Rock Tour of England in 1977– with RAY CAMPI & HIS ROCKABILLY REBELS and MAC CURTIS– made a tremendous impression, spawning a whole new generation of teenagers who called themselves “Rockabilly Rebels” and “Hep Cats”, and who eagerly bought each new Rollin’ Rock record imported from the USA.

Such a success was achieved that at one point in England Rollin’ Rock Records had 7 hits out of 20 on the Rock’n’Roll charts, including the number one, two and four.

The label grew to such a cult level that across England you could read graffitis:” Rollin’ Rock Rules!“, “Forever Rockabilly Rebels“!

A song was written by Bobby Clifford (aka Al Roberts Jr.) of EMI Records, titled “Rollin’ Rock Rock”, which pays tribute by name to Rollin’ Rock artists Ray Campi, Mac Curtis, Charlie Feathers, and to Yours Truly! It was released on a Sonet LP, titled (ironically): “The Best Of British Rockabilly” !!

In Japan Rollin’ Rock aficionados formed a cool Western Swing / Rockabilly band which twice already was featured at Viva Las Vegas. The name of the band is, yes, you guessed it, THE ROLLIN’ ROCKS!

In 2003  QUENTIN TARANTINO used a Rollin’ Rock song (recorded in 1974) “That Certain Female” by the great CHARLIE FEATHERS in his hit movie “KILL BILL 1”.

Ten years later in 2013 the song was also used in a VISA/NFL commercial. A timeless classic rockabilly gem which is just as exciting today as it was 40 years ago when first recorded!

Every year the day before the VIVA LAS VEGAS Weekender we hold our International Rockabilly Rebels Meet & Greet here at my house, Rancho Ronny. Usually over 200 Hep Cats & Chicks show up to listen to a dozen singers/bands and/or just  to relax. The Meet & Greet became so popular that English singer R. Razor wrote a song about it, “Rockin’ With Ronnie”:

This song appeared in a CD with Elvis, Little Richard, The Coasters, Chuck Berry, Duane Eddy, Fats Domino and Jerry Lee Lewis!! Wow, what a great honor to have a tribute song for me to be included with such company!!

If you wanna read more about the above, check out some of my 70 Columns at the Rockabilly Hall Of Fame: